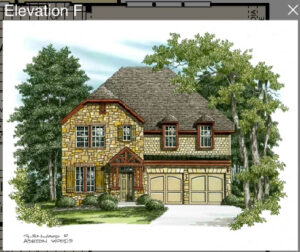 That’s us! Today we got a pre-qualification letter from Wells Fargo for a house in Woodstock. This feels like a huge milestone, and it’s come earlier than we expected. We have multiple spreadsheets showing our savings plan and potential home prices, and we didn’t think we’d reach this point until at least October, when our official 3-years-post-foreclosure wait ends.

Backstory: We’ve been randomly looking at houses and neighborhoods for the past year or so, since we moved to Woodstock in December of 2012. We love our rental townhome and neighborhood, but we’ve seen home prices go up about 30% (!!!) since we’ve been here, and it’s just not affordable. So we’ve been exploring in and around our area. Some of the neighborhoods have been too pricey, some kinda shoddily-constructed or downright terribly built, some too tiny/close/pretentious or too old-folks “Active Adult Community”. Like Goldilocks, I think we’ve found one that’s Just Right. We’ve been back there a few times to look at houses in various stages of construction, and it still has a good vibe.

So we found a floorplan that we liked and it happens to be the least expensive one they have. We especially like the elevation that makes it look like a thatched-roof cottage. It has a small amount of proper timber frame detail on the stoop, not the cheap tacked-on pretend-Craftsman stuff. It has 4 bedrooms and 2,800 square feet, which is a lot for us, but it’s almost impossible to find a smaller house that’s new construction. At first we thought we’d keep costs down by not having a basement (costs an addl $39k), but the more we talked about it, the more we realized we need one. Tony’s been complaining about not having enough storage space since we left Preserve Parkway, and it’s worth it to me for him to be happy, especially since we plan to be there a long time. It’s also nice to have a tornado shelter if needed.

The builder has a deal with Wells Fargo that offers $15k credit towards upgrades and $3.5k towards closing. Despite the fact that Wells Fargo is fucking evil, and I’d rather not do business with them on principle, $18k in incentives would go a long way for us. We decided to apply for a mortgage with WF and see what happened. To my surprise, it was a fairly easy process. I spoke with the very nice loan officer, who said she’d look into the most recent regulations for buyers with previous bankruptcies and foreclosures. Within a couple of days she said we were in good shape for an FHA loan with 3.5% down and an interest rate of 4.25%, which is a pretty standard rate right now. She sent a good-faith estimate showing how much it would cost to close and monthly payments, along with a request for a ton of documentation. It was all pretty easy to gather on the internets, which is a big improvement over our last mortgage process 7 years ago. Today, WF sent over a proper preapproval letter. So that’s us, pre-qualified and ready to buy.

Tomorrow we go back to wander around the neighborhood by ourselves, since the sales rep will be off at a company meeting. The weather is supposed to be a little rainy but just 79 degrees, blessedly cool for this time of year. I think it will be good to walk around unencumbered and check everything out. Sunday we have an appt to meet with them to talk about specifics, and if everything works out, we’ll get a contract started.

We tentatively picked out little piece of land last time we visited, an edge lot that backs up to the woods instead of all the neighbors’ yards. I checked the topo map and it’s close enough to the creek that there’s very little risk of anything being built in the back yard in the future, but far enough to not be at risk of flood. It’s a little more expensive because it’s very slightly bigger, but in a neighborhood where houses are that close together, IMO the extra space is worth spending a little more. Once we decide for sure on a lot, we reserve it by putting down $5k “Ernest Money” (anthropomorphized since Tony misspelled it on a spreadsheet) and sign a contract. After that, we have 30 days to secure a full mortgage approval, and then start picking out specific upgrades and options. The house we select now wouldn’t close until February, so we would have time to save some more cash. We definitely want to put down more than 3.5% though, and hopefully more than 10%.

Overall, this is a really exciting process, but it’s also scary. On one hand we’ve never had a brand-new house built for us before. On the other hand, it’s a big, long-term, expensive commitment compare with renting someone else’s house. I’m a little concerned about getting burned by a home builder I know very little about. Even though I’ve done some homework, you never really know what you’re getting into. But buying a house is part of our longterm plan, so that by the time we reach retirement age (too soon!) we’ll have a home that’s paid for and we won’t need to eat cat food and work as Wal-Mart greeters.

Beyond that, though, I keep thinking about our agreement not to jump into another mortgage before we’re really ready. We are ready to the point where we can actually do it, now that Tony is working and we’re saving almost all of his salary, but we won’t have much left over for a while. We probably won’t have a full 20% down payment either, which means we will have more to pay off and less equity. We definitely have a plan to pay it off early, especially if we can refi in a few years and get rid of the damn PMI. In terms of sustainability, we’d be able to pay the mortgage and survive on just one of our salaries if the shit hits the fan again, but on Tony’s salary it would be really tight. And of course, if one of us is unemployed for the long term, we’ll still be paying the mortgage when I’m 80. Literally.

Still, we are well ahead of where we were when we bought our farm. We did that with $0 down, which is part of why we were so underwater when the recession hit. Our salaries are about the same, but the new house would be $50k less than we paid for the farm. We’re getting much less land, but a much nicer home…without a bathroom that’s about to fall into the kitchen. And now that we are both working, we’ve agreed that we are too busy/tired to do much more farming than a little front garden and maybe a couple of raised beds in the back yard. It really suits where we are now in life, but it’s a little overwhelming. I’m still trying to not allow myself to get too excited or emotionally attached, because it could all fall through at any point. Waiting in this limbo until a February close would be difficult.

Of course, the other option is buying a less expensive “used” house that is perfectly serviceable but not brand-spankin’ new. We could save $50k or more, get it paid off more quickly, and have fewer concerns about having to pay it one salary if needed. The tradeoff would be potentially more repairs sooner, less house-love, and less resale value if we decide to move. I kind of feel like this is what we should be doing though. I may feel this way because our last home-buying adventure turned into such a disaster. But I also know that I need to let that shit go and focus on the future, not the past. I could go the ultimate-justification route and say that this new house would actually be therapeutic and help us get over the foreclosure and bankruptcy. It may turn out to be, but at this point I’m not going to use that as rationalization for something that, if I’m honest, I’m not 10000% sure we should do. I think we’d probably be fine, and we’d enjoy the hell out of it, but… I thought the same thing last time.