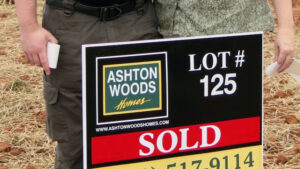 Yesterday, after a lot of coffee talk about home buying, we went over to our prospective new subdivision and literally walked around in the mud to be sure of which lot we wanted. We still like Lot 125, which is the one we started with. After stomping as much mud off my boots as possible, we walked around the neighborhood and explored a house being built that’s the same floor plan and elevation we’d selected. We still liked it all, and I felt much more comfortable about the whole thing after that.

So today, we really did it. We brought Ernest Money with us, handed him over, and started the process. During the contract process, we added some structural options, such as a gas line to the back of the house (for a gas fire pit later), an extra water spigot on the deck for planters, having the deck flooring screwed instead of nailed, a raised hearth so we can get a stone fireplace, and oak stairs instead of carpeted. Umpty-leven pages of contract-signing later, the rep brought us over to our lot and let us put the SOLD stickers on the sign.

It still doesn’t feel quite real yet…maybe because it doesn’t close until mid-February, which is fully 7 months away. Over the next few weeks, we will have several appointments at the design center, where we will select options like paint colors, CAT-5 locations, cabinets, hardware, tiles, carpet for the bedrooms, etc. We’ll also have a pre-construction meeting with the builder at some point. Maybe after that happens, it will feel more like real life. Oh, and we still have to get the full mortgage approval. If it doesn’t happen within 30 days, the contract would be cancelled and we’d get Ernest Money back. But that would be disappointing and sad. I’d rather put my energy toward this:

Someday, Lot 125 will grow up to become our new home!